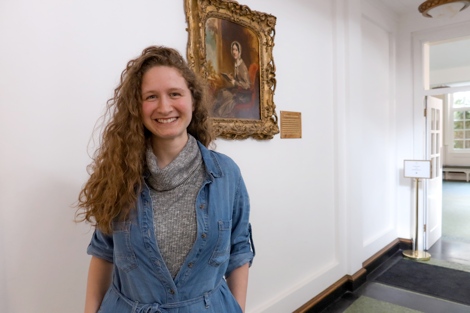 My first year at University was a whirlwind of new friends, challenging mathematics, and of course, my university's Harry Potter Society.

My second and third years as an undergraduate were completely thrown off track by an emotionally and physically abusive relationship. Gradually I found it difficult to work, difficult to sleep, difficult to think... each month brought unexpected new ways in which my body could physically react to stress.

I managed to scrape a 2.1 overall for my BA exams, and decided to come back for the Masters year of my course: mostly because I had made no other Life Plans, and part of me wanted to take my one last chance at success. To show myself I could do it.

The repercussions of the relationship lasted well into my fourth year (and beyond). I desperately wanted to feel like I had taken action to stop what had happened to me happening to anyone else. But every email, every meeting took hours to prepare for and recover from. After a particularly jarring experience at the police station just before Christmas, I realised this wasn’t a battle I could fight at that time.

So I picked a battle I could fight, and began to seriously study the life and work of Mary Somerville, a 19th century philosopher and mathematician. This turned out to be a very eye-opening experience. Science and mathematics are quite clearly male-dominated fields, and while there are many initiatives to encourage women to pursue careers in such areas, I had never really understood how this situation came to arise in the first place. Somerville lived at a time when it was thought that an education was actively harmful to the health (and fertility) of women. When women, people of colour, and those of a low socioeconomic background were systematically excluded from the scientific communities to which, today, we attribute almost all recognition for scientific achievement. I was fascinated by her life, and the lives of others like her, who navigated this political minefield in order to pursue their research. Furthermore, her work, which frequently and eloquently conveyed her passion for science and mathematics, inspired me and reminded me why I had chosen to study maths in the first place.

I felt a bit like I had woken up for the first time in years. Sitting down to study mathematics began to be something I looked forward to again, rather than something to dread.

As exams, and the end of my time at University, drew closer I was tempted by the idea of a PhD in the History of Maths in order to continue my studies of Somerville's work. But I knew I needed a break from academia first, and got myself a job in the Development & Alumni Office at Somerville College which had the wonderful bonus of prolonging my easy access to the college library!

During my year out I filled my weekends with reading, began giving talks on Mary Somerville at conferences, and thoroughly enjoyed working as a teaching assistant. When my results came in, they were a huge shock. My dissertation on Mary Somerville was awarded a University Prize, and I had the marks I needed to apply for a PhD. I also had a new weapon with which to fight the ever looming Imposter Syndrome.

Now, I am very much enjoying full-time research at the Open University, and am eagerly looking forward to where my research will take me.